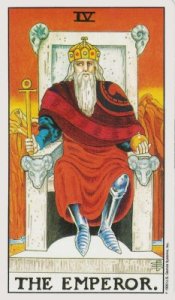 Structure and discipline, love it or hate it we are all subject to it to some degree. The Emperor asks us to look at these concepts and to consider their positive attributes. How can discipline and structure help guide and motivate us?

As someone who spent many years in a state of perpetual rebellion, its sometimes hard for me to embrace the good in something that feels as limiting as structure, or as restrictive as discipline. But the fact of the matter is that structure and discipline play an important role in being a productive, healthy, happy being. Without it nothing gets done. We fall off the wagon. The ball gets dropped. We arenâ€™t able to push our limitations or create new patterns or paths in our lives. We canâ€™t grow. The trick is, like with most things, we must employ the energy of the Emperor in a balanced and mindful way. 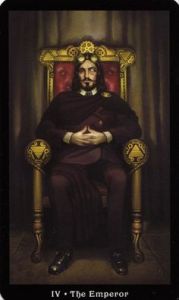 The Emperor - The Steampunk Tarot

Another thing to consider with the Emperor is that the he is, well, the Emperor. He is in charge, he is the one making the rules, so when you step into his energy you are claiming authority to make your own rules, set your own goals, create your own structure. Working with this archetype doesnâ€™t have to mean submitting to the parameters that others have put in place. In that way tapping into The Emperor within you can be an act of empowerment. You are saying “I am creating structure and discipline in my life in alignment with what I want to accomplish, in alignment with my values, to better position myself to accomplish my goals.” Since the structure and discipline you create is coming from within you it doesnâ€™t oppress you, it is an aid to you, it is a resource.

Standing on the threshold of 2015, tapping into the positive power of The Emperor is going to be more important than ever. His energy will play a significant part in keeping the momentum going for our resolutions and goals in the new year. I think this is why he is resonating so strongly with me right now. The excitement and power surrounding the shift into the New Year can help us plan and motivate us to get started, but wonâ€™t necessarily be able to carry us through to completion, much like the Aces represent the spark, the potential, but not the finished product. We need to build systems to keep us motivated and accountable as we move away from the catalyst that is New Year energy.

So how can you add some structure and discipline to your life in a way that is healthy and productive, not restrictive and oppressive? What areas in your life need more structure and mindfulness? Bring that Emperor energy in by starting a routine, or making a plan, or creating a system that will help keep you on track. Set up some personal boundaries both internal (your interactions with yourself) and external (your interactions with others). Commit to something that you know you need to do or implement and then follow through with meaningful action. That is Emperor energy at its best.

Wishing you all a Glorious 2015