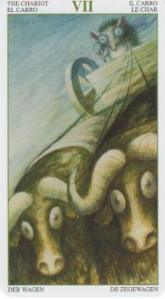 Tarot of the Magical Forest

I was working with my new Tarot of the Magical Forest deck this week and I got to thinking about The Chariot. When I looked through this deck, The Chariot was one of the cards that I particularly liked. I think the hedgehog and his ox cart are charming. The thing that really struck me about the image though was the perspective, the angle of the image really intensifies the card. There is a sense of motion that is generated by the way the picture is tilted that has a very erratic energy to it. That got me to thinking about The Chariot in general. Most of the time when I think of The Chariot I think of concepts like “being in control” or “victory” or “harnessing energies” all generally positive and empowering. With The Chariot from the Tarot of the Magical Forest however, I finally made a strong connection with the more perilous aspects of this card. I started getting an image of this hedgehog in his ox cart barreling through the countryside, tearing up fields and nearly running down citizens. He’s bouncing up and down, barely able to keep his footing, clinging to the reins for dear life. You get the picture. 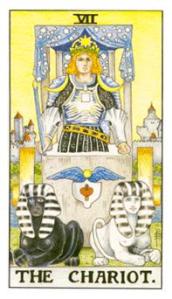 I know for myself, that spending a lot of time working with the Rider Waite deck had made The Chariot feel more stagnant and its energy more benign. Its never really come alive for me because of the lack of motion in Pamela Coleman Smith’s image. But when you think about it, The Chariot is about motion. Not only is it a vehicle, its a fast vehicle. Chariot racing was a wildly popular sport in Ancient Rome and you can bet that if you didn’t have control of your Chariot in that environment  that disaster would ensue. That is the darker aspect of this card, the one I connected with in the Tarot of the Magical Forest. It says a lot about the chaos and destruction that follows when you let external things in your life drive you or your decisions. If you’ve ever felt like your life is running away with you and there is nothing you can do to get it back on track, you’re just holding on for all you’re worth and praying for everything to slow down, then you know exactly what I’m talking about.

I think its important not to forget this when The Chariot comes up in a reading. Yes this card can be an image of power, control and triumph, but it can also pose important questions to the querent about who is controlling their life, are they letting themselves be tossed around in the back of their cart or are they firmly holding the reins and guiding their vehicle towards the destination that they chose. 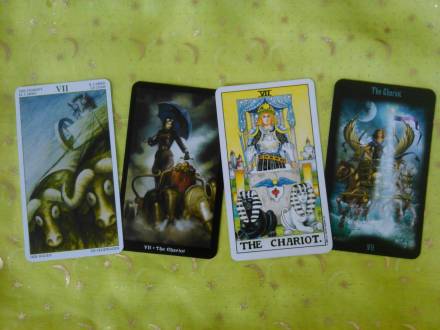